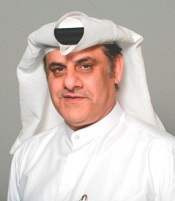 Emirates Islamic, one of the leading Islamic financial institutions in the UAE has appointed Salah Amin as its new Chief Executive Officer.

Salah brings nearly 30 years of experience in the banking industry, having started his career at Emirates NBD Group in 1989. Salah has a solid background in operating businesses, having worked in senior managerial roles including head of branches and Head of Corporate Banking Unit before taking on his latest role as Executive Vice President, Head of Corporate Banking Group, Emirates NBD.

Salah succeeds Jamal Bin Ghalaita, a seasoned veteran who retires after 28 years of service with Emirates NBD Group. Jamal will serve as Advisor to Emirates Islamic's Chairman until the end of 2018. Throughout his career with the Group, Jamal took on a number of leadership positions contributing significantly to building Emirates NBD and Emirates Islamic's highly successful retail and wealth management businesses.

"Jamal Bin Ghalaita was the linchpin of Emirates Islamic's remarkable brand transformation to one of the fastest growing and most successful banks in the UAE," continued Al Qassim. "On behalf of the Board and management of Emirates Islamic and Emirates NBD Group, I would like to thank Jamal for his immense contributions during his tenure as we bid him a fond farewell."

One of the fastest growing banks in the UAE, Emirates Islamic delivered strong results last year, with a six-fold increase in net profit to AED 702 million, recording the highest ever net profit since its establishment in 2004. Over the years, Emirates Islamic has acted as key contributor to the development of the overall Islamic finance sector, in support of the vision of His Highness Sheikh Mohammed Bin Rashid Al Maktoum, Vice President and Prime Minister of UAE and Ruler of Dubai of making Dubai the global capital of Islamic economy. The bank has won local and international recognition for its strong record of performance and modern innovation-driven approach to Islamic banking.